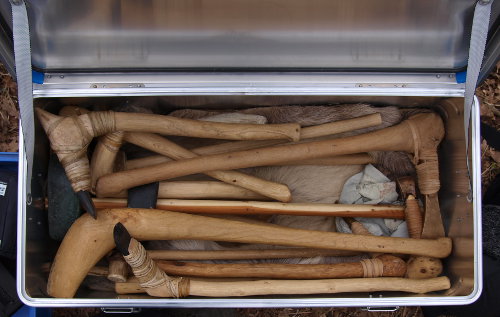 Working with LBK adzes was secondary this time. Therefore tree felling with early neolithic broad wedges of type Rössen (so-called “Rössener Breitkeile”, Rössen culture approx. 4300 to 3500 B.C.) were carried out. Contrary to all expectations, the Rössen broad wedges proved to be much more efficient compared to the adzes due to their much more ergonomic handling. Felling notches with an angle of well below 90° and much shorter precipitation times could be achieved with them. The splitting of the freshly felled oak trunk was made difficult by their extreme rotation. Tests of smoothing fresh oak planks had to be abandoned on Sunday due to the extreme overnight frost, where stone and bone tools were no longer workable on the frozen wood. Three splitting planks from this year were stored under water in rain water cavern for further processing in the next year's experiment. All in all, the three felling and processing proved to be much more difficult due to the hard wintery temperatures than in the previous two years.